Basics of Cutting and Polishing Gems

The place relating to engraving, cutting, or polishing of stones and gems is known as a lapidary, while a person who cuts and polishes gems is called a gem cutter or a lapidarist. Gemstone material that has not been extensively cut and polished is referred to generally as rough. Rough material that has been lightly hammered to knock off brittle, fractured material is said to have been cobbed. All gems are cut and polished by progressive abrasion using finer and finer grits of harder substances.

There are several techniques used in lapidaries.

In most gem sawing, a thin circular blade usually composed of steel, copper, or a phosphor bronze alloy impregnated along the outer edge with diamond grit and rotating at several thousand surface feet per minute literally scratches its way through a gemstone. A liquid such as oil or water is used to wash away cutting debris and keep the stone and the sawblade from overheating, which could cause damage to both the stone and the sawblade.

Grinding, usually with silicon carbide wheels or diamond-impregnated wheels, is used to shape gemstones to a desired rough form, called a preform. As with sawing, a coolant/lubricant (water or oil) is used to remove debris and prevent overheating.

This is similar to grinding but uses finer abrasives in order to remove deep scratches left by coarser abrasives during grinding. Since it removes material less rapidly, it also allows more delicate control over final shaping of the stone before polishing. For stones with rounded surfaces, a flexible surface such as a belt sander is often used to avoid creating flat areas and promote smooth curves.

Lapping is very similar to grinding and sanding, except that it is performed on one side of a rotating or vibrating flat disk known as a lap, and it is used especially to create flat surfaces on a stone (as in faceting). Laps are often made of cast iron, steel, or a copper-bronze alloy, but other materials can also be used.

After a gemstone is sawed and ground to the desired shape and sanded to remove rough marks left by coarser grits, it is usually polished to a mirror-like finish to aid light reflection from the surface of the stone (or refraction through the stone, in the case of transparent materials). Very fine grades of diamond can be used to polish a wide variety of materials, but other polishing agents work well in many instances. Usually, these polishing agents are metal oxides such as aluminum oxide (alumina), cerium oxide, tin oxide, chromium oxide, ferric oxide (jeweler’s rouge), or silicon dioxide (tripoli). Different stones are often very inconsistent in their ease of polishing, particularly in the case of faceted stones, so gemcutters are often very inventive in trying new combinations of polishing agents and polishing surfaces — often tin, tin-lead, lead, leather, felt, pellon, wood, or lucite laps for flat surfaces such as facets. Rounded surfaces, such as on cabochons, are often polished on felt, leather, cork, cloth, or wood. Polishing removes small quantities of stone and can be used, especially when faceting small stones, to do ultrafine shaping of the stone.

When a gemcutter desires a hole in or through a gemstone (e.g., a bead), a small rotating rod or tube with a diamond tip, or a slurry of silicon carbide and coolant, is used to drill through the stone. Ultrasonic, or vibrating, drills are also very effective, but they tend to be costly and thus reserved for high-volume commercial drilling.

Large quantities of roughly shaped stones are often tumbled, i.e., turned at a slow speed in a rotating barrel with abrasives and water for extended periods (days or weeks). By tumbling with progressively finer grades of abrasive (usually silicon carbide) and washing carefully between grades, the stones are gradually smoothed and polished to serendipitous but often very attractive shapes. Tumbling barrels are often hexagonal in outline in order to enhance the stirring action of barrel rotation. An alternative to rotatory tumblers is a vibratory machine, often called a vibratory tumbler, in which the containing barrel vibrates rather than rotates. The more stationary arrangement of vibratory machines makes it much easier to examine the progress of the stones inside, whereas standard tumblers must be halted in order to check progress. In addition to polishing gemstones, tumbling is often used to polish large quantities of metal jewelry. 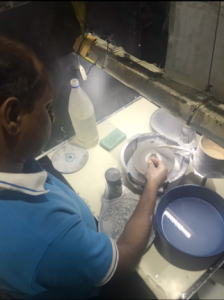 Using above techniques Gemstones can be fashioned into following forms.

One thought on “Basics of Cutting and Polishing Gems”